A cold blast from Minnesota's ice racing past, February 7, 1954 to be exact. This quaint clip has actually been floating in the YouTube-sphere for a few years.

Film of the Winter Carnival Ice Race on Lake Phalen in Saint Paul, Minnesota, was made 66 years ago, written and directed by SCCA club race driver, Thomas C. Countryman. Hosted by Land O' Lakes Region SCCA, the event was "the third annual running of the sports car race on ice." It was also covered by the NBC network and noted news commentator and Timex watch pitchman, John Cameron Swayze. His tag line for Timex was, "It takes a licking and keeps on ticking."

The 5-lap Pennzoil Trophy Dash was held on frozen Lake Phalen in Saint Paul. However, the 1.25 mile ice course was lightly covered with gravel. Obviously studded tires were not too plentiful in the earlier days of auto ice racing. There was also no Environmental Protect ion Agency around until the Nixon administration either. A fun fact, Richard Nixon was the second President in U.S. history to face impeachment, but to his credit he actually started the EPA and did give a hoot not to pollute.

Meanwhile as a pre-race ritual, to reduce the loss of finish on cars from the constant barrage of flak by gravel, drivers taped off their chrome and paint on what are now highly collectible and ridiculously expensive sports cars. Also, one can imagine at least a few minor body parts are stuck in the muck at the bottom of Lake Phalen. (Perhaps a Timex watch with the initials J.C.S. is also submerged.) As far as I know, no one has mapped the lake bed with Ultra-HD side-scan sonar.


The first two minutes in this clip are old shots from Watkins Glen and airports once used by the Strategic Air Command. It is advanced to the Land O'Lakes Region ice race which begins at 1:40.

All led by a "beautiful Studebaker" as the pace car.

Tom Countryman #10 Porsche is shown in film but not mentioned along with a few other drivers in the 15-car field. In this film Doc Halvorson won race, followed by Chris Tanida in 2nd and Johnny Crea in 3rd position. 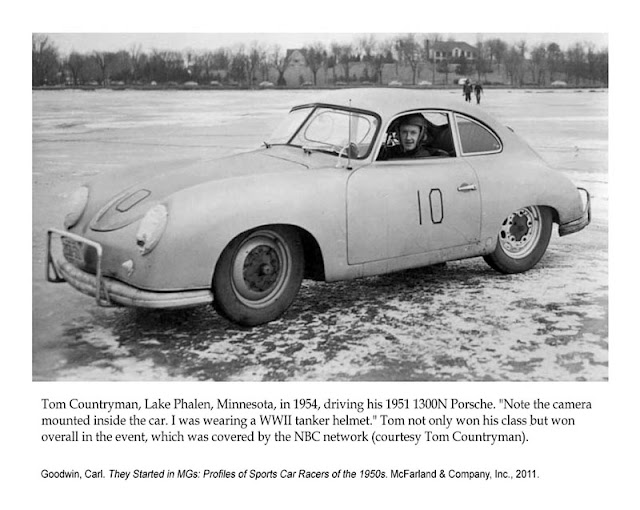 Ken Perrotti and his brother Chris rebuilt the car together, and did an exquisite ground-up restorative job. The engine is a 600 hp Chevy 358 cubic inch V8, which is topped by a large Holley carburetor, and has a $5,000 custom stainless steel crossover header exhaust.

The racecar was built in 1980 by Pat Stair of Minneapolis, and still has its original Borg-Warner Super T-10 4-speed, which is coupled to a Schiefer quick-change rear differential. When Perrotti acquired the Monza, it came with Hurst/Airheart disc brakes, which he changed over to a new Wilwood 6-piston type.

This born-again Monza weighs in at 2,400 pounds, as was the target weight on the IMSA AAGT racecar in the 1970s, giving it a neck-snapping ratio of 4.00 lbs/hp. That's essentially identical to the Porsche 918 Spyder Weissach Package having 3,616 lbs and 887 hp, or 4.08 lbs/hp for the street production sports car.

The Monza, formerly driven by Carl Shafer, Dick Kantrud, Marshal Kirkof, and Rick Balderson was trailered to Lime Rock Park in August for the annual vintage festival, but Perrotti chose not to run the car. They discovered the new engine was had a high oil pressure issue and didn't want to risk damaging in the race. Since then the problem has been fixed. Perrotti also said he is going to sell the Monza, and move on to a new project car.

We hope to see the old JRS Racing Monza on the vintage circuit, and is sure to be a crowd pleaser. It would be fitting if the next owner(s) brought the car back home to Minneapolis, Minnesota. We shall see what the car's future provenance will be. 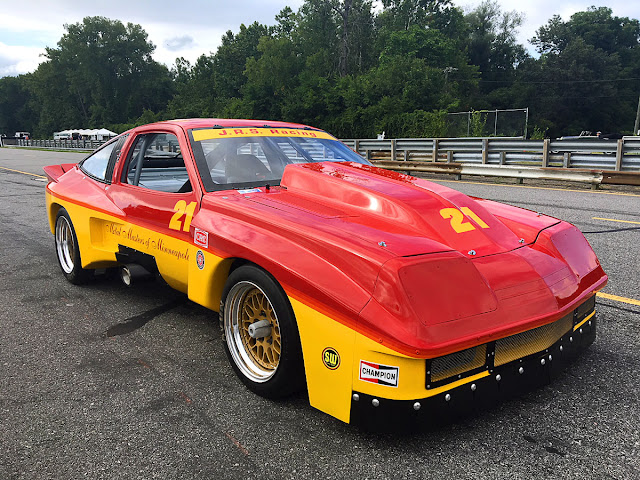 Ken and Chris Perrotti's total rebuild of the Pat Stair-built SCCA Trans Am Chevrolet Monza is nearly done. The car is looking absolutely fabulous, with its livery backdated to 1980, when it was first driven by Carl Shafer with the number 21. The Monza road racing chassis was originally built by Pat Stair of Minneapolis for Jack Sandberg's "Metal Masters" racing team and their 1980 SCCA Trans Am effort. John R. "Jack" Sandberg was owner of J.R.S. Racing and Metal Masters of Minneapolis, and a notable Reno airplane racer.

The Pat Stair Chevrolet Monza was driven once by Carl Shafer in the 1980 Trans Am race at Hallett Motor Racing Circuit in Tulsa, Oklahoma. However, Shafer retired early in the race due to electrical problems. The car was sold the following year to SCCA racer, Dick Kantrud of Minnesota. Dick raced the Monza in both SCCA Trans-Am and SCCA Club races in 1981 and 1982, before selling the car to Marshall Kirkof.

The Stair Monza saw more track time in the 1980s when owned and driven by Rick Balderson, of the Central Florida Region SCCA. The car was sold to Mike Perrotti in 2012, and since then, has undergone a meticulous rebuild.

Thirty eight years and a few owners later, the Stair-built Chevrolet Monza has been returned to it's original red/yellow livery and car number 21.

Ken Perrotti says they will debut the car at Lime Rock Park's Historic Festival 36, August 31 to September 3, 2018. His son Mike Perrotti will be driving the Monza at LRP's vintage race that Labor Day weekend.


* See more photos of the Monza at this link: Stair SCCA Trans Am Chevrolet Monza 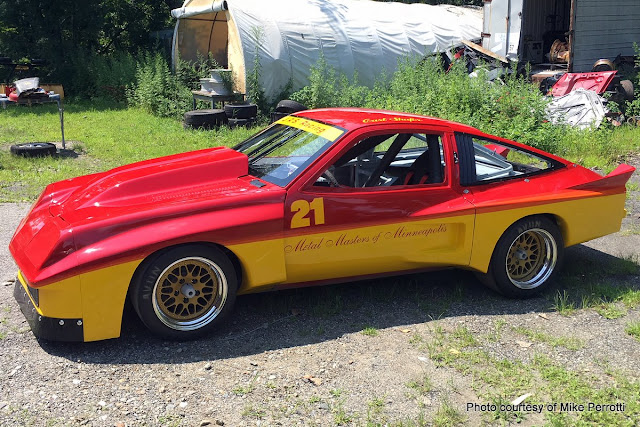 Land O’ Lakes Region SCCA was established in 1953, and Bill Peters, Sr. was the chapter's founder. The organization is based in Minneapolis/St. Paul, Minnesota, and is part of the Central Division of SCCA. The Region has a long history of organizing and hosting local RallyCross, PDX/Solo, Road Rally, and Club Racing events. It's home track for club racing is Brainerd International Raceway, MN, which opened in 1968.

Southport Airport, Mankato Airport, Breezy Point and Metropolitan Stadium, were some of the temporary tracks used before Donnybrooke raceway (now Brainerd International Raceway) became Minnesota's premier race track, when it opened in 1968. The name Donnybrooke was formed from the names of Donny Skogmo and Brooke Kinnard, who both died at Road America in 1966.

Below is an excerpt about SCCA racing at Southport in the 1960s, from EAA Chapter 25, Minneapolis/St. Paul, MN newsletter (June 2006) called, "Southport Airport, A Time Forgotten" by Noel Allard.


The Sports Car Club of America, Land-O-Lakes Chapter, staged annual sports car races at the field from 1963 through 1968 using the runway and taxiways. In 1969 the races at Southport were discontinued and moved to the newly completed Donnybrooke racetrack at Brainerd. I attended the Southport races and one year watched them while orbiting overhead in a Cessna 150 belonging to the Cloud 7 Flying Club out of Flying Cloud Airport. Forrest Lovley flew overhead one year and when he wanted to land, chose a break in the races and landed, catching hell from the organizers. Scotty Beckett, the winner of the 1963 race, told me that the racing arrangements were handled between the club and Chuck Doyle.

Below are two aerial photos that I edited and annotated for clarity. 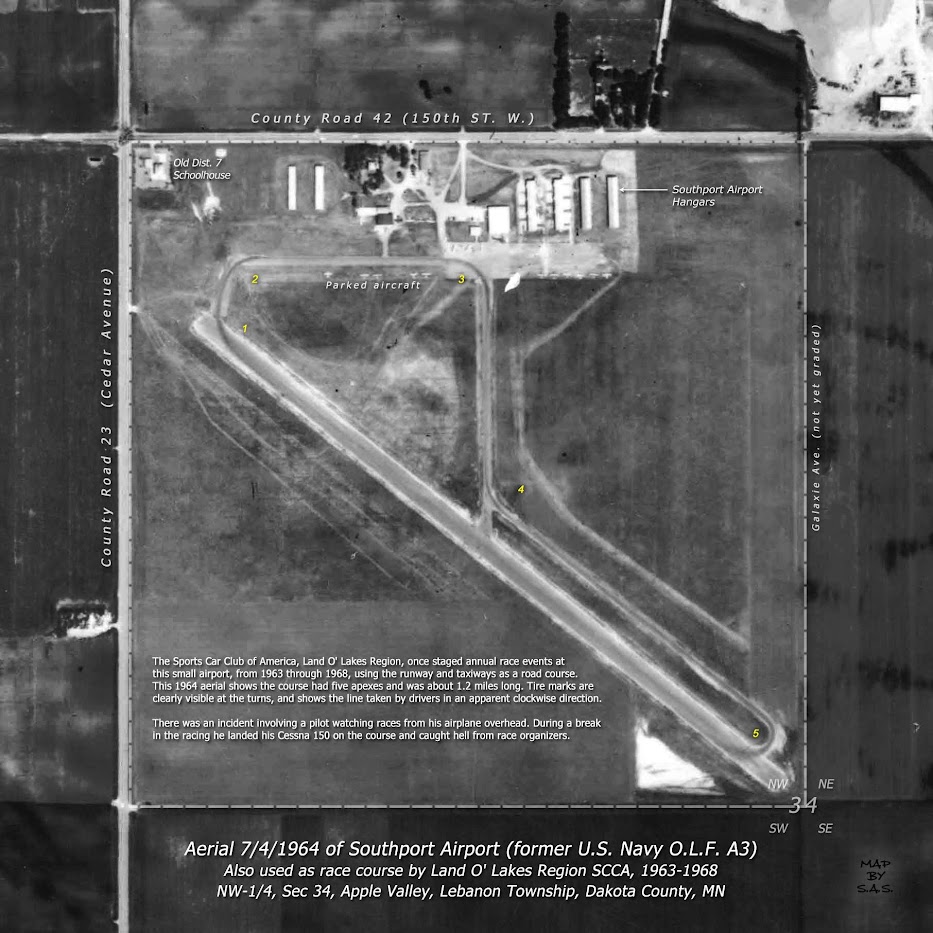 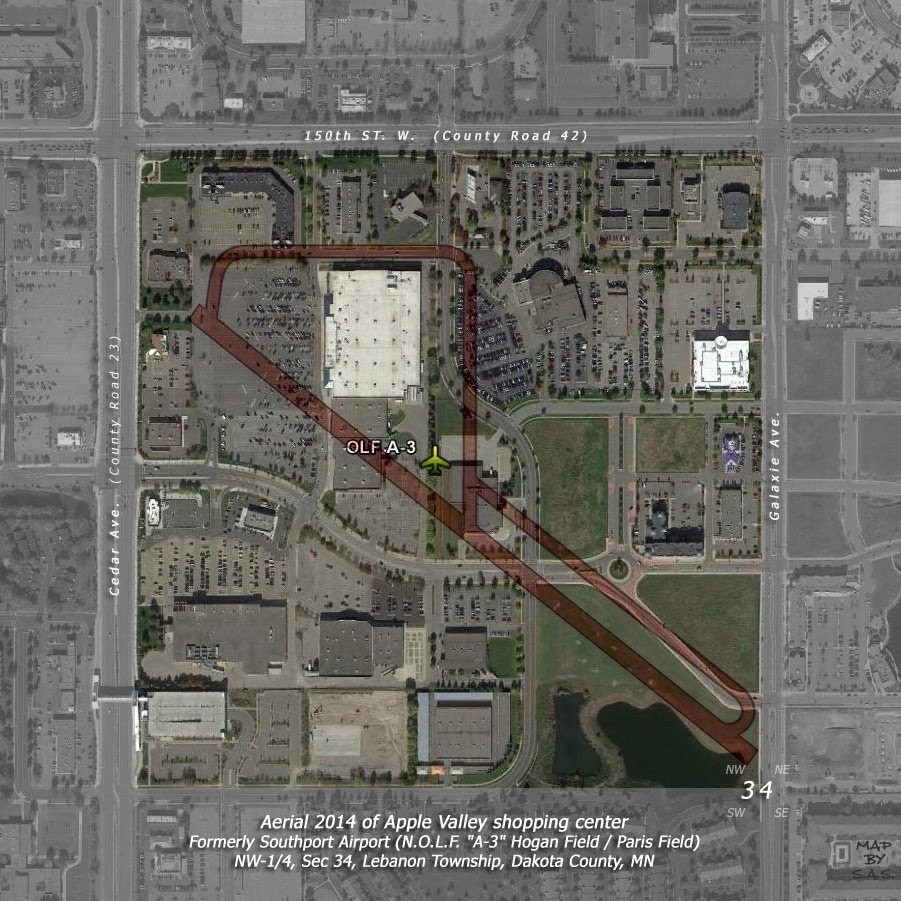 As mentioned in a previous post, Mike Perrotti is current owner of the Chevrolet Monza GT racecar originally built by Pat Stair. The car is still undergoing a top to bottom rebuild, and Perrotti recently mentioned the project is now nearing completion.

Carl Shafer was the first to compete with the new Chevrolet Monza but only drove it briefly in 1980. It was designed and built by Pat Stair for Jack Sandberg's "Metal Masters" SCCA Trans-Am racing effort.

The second owner of the Stair-built GT Monza was Minnesota SCCA pro racing driver, Dick Kantrud. The car assumed a striking and pleasing livery of yellow over blue, with red and orange accents. He and his dedicated crew campaigned car no. 15 in SCCA Trans-Am series and SCCA club racing for the 1981 and 1982 seasons.

Mr. Kantrud sold the GT car to another Minnesotan in late 1982. Marshall Kirkof took delivery, renumbered and repainted it as car 66, red.


Kirkof raced the car only once or twice, in SCCA GT-1 class, at Brainerd Int'l Raceway in 1983. The Monza met with an abutment at Turn 9 on Brainerd's 3.1-mile Donnybrooke course. Thus ended the owner's relationship with the Stair Monza.

In 1983, Rick Balderson of Florida purchased the car from Kirkof after repairs from the crash at Brainerd were made. The Stair Monza saw more track time than at any other time in its history.

Rick successfully campaigned the Monza with SCCA between 1985-1989, where he ran in some eighteen regional, divisional, and national races in Florida. In 1986, Balderson qualified with 77 other cars at the 12 Hours of Sebring, IMSA Camel GT endurance race, but he had problems starting.

Rick parked the Monza in 1989, and it was stored in a central Florida warehouse for nearly 23 years. His crew chief, Art Sierzanga, owner of Corvette Tech, Inc. in Debary, FL, had possession of the car until its sale in 2012. Mr. Balderson then described the Monza as a "basket case" but restorable.


Today, Pat Stair's old Chevrolet Monza GT racer is being fully rebuilt, head-to-toe, for vintage racing by current owner Mike Perrotti of New York. And, it is a work that is truly progressing.
In 2012, Mike took ownership and has persevered with the car's restoration since. "Things are taking much longer then expected but we are excited about how the car is going to turn out. Few more things to touch up and then off to paint." says Perrotti.

According to Mike, about the only thing left is the car's exterior paint work. However, as many Monza maniacs are no-doubt wondering - how will the car's livery appear?
No comments:

Ghost Tracks of the Midwest